I'LL GET YOU MY PRETTY 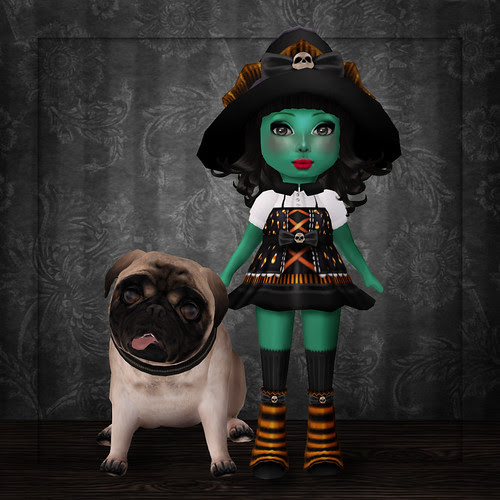 I am so glad I did not miss this Fabala-fabulous dollie that KatatOnik put up for sale last Fifty-Linden Friday because, honestly, the green-skinned-one is my favorite. A pink-faced cutie pie doll is still for sale with several different colors of dresses. (And I bet we'll be seeing more of these dollies for other holidays. Oh I really hope so.) ... and if you are in love with the little dog, it is from Zooby's.

AT THE RAZOR WIRE

As I lay on the other side of the razor wire, just bleeding, it stopped to look at me. In a few moments I panicked. Most zombies are single minded eating machines. Not this one. I watched it stop and think.

Instead of charging in and catching itself on the blades and barbs, it shuffled up to the fence, and sidled sideways, cutting itself a bit, but passing through the wire.

The Outfit from Death Row Designs includes Helmet, Uniform, Boots, Skin and Eyes. I added the bomb belt for a little more dimension and just cause its fabulously well made.

Enjoying a fine day at the sea before the first freeze.

The loverly knits, plaids and argyle made me think of Her Majesty, but I don't have an old Land Rover so I am portraying a lesser member of the nobility. Perhaps a very distant cousin. I started dressing with the Sleepy Eddy sweater and the Gun provided by Don't Freak Out for the Seasons Hunt. Sleepy Eddy also made these leather clogs that I couldn't resist.

The sweet little necklace from Lassitude and Ennui includes a texture change HUD that lets you customise the colours of all its components.

Job well done (again!) for the all the shops and organizers of the Seasons Hunt, which has been one of the few must-do hunts in Second Life. I loved so much discovering a few new shops, squealing while I opened the boxes ... and knowing beforehand that none of the prizes would be junk. *happy sigh*

Last week I had this year's first real cold snap, so I wanted to try putting together one of those mega-layered-supa-primmy outfits that some (other) bloggers do so well. I tried combining three tops but the prims didn't work, so I took off the Teefy shirt. I stretched the heck out of the scarf to fit it around my hair. And oh yes, a slider diet to keep my bum from sticking out of my clothes.

Dressing warmly can be a lot of work. But so worth it.

I stopped running about to take a little walk.

This spot has the sweetest little path with a covered bridge. It was calling my name.

I turned off my computer yesterday and went looking for colored leaves. These are brighter orange, but I saw the real leaves with dog and daughter.

Most of this outfit I picked up at Collabor88. I think I bought half the store before I noticed the little candy hunt that was going on. Find twelve candies that contain six colors of culottes and six bustiers too. Did I ever say I love long culottes with boots? This plum-colored pant is just my thing.

oh my! ... I think I will probably be up all night tonight. Yum! 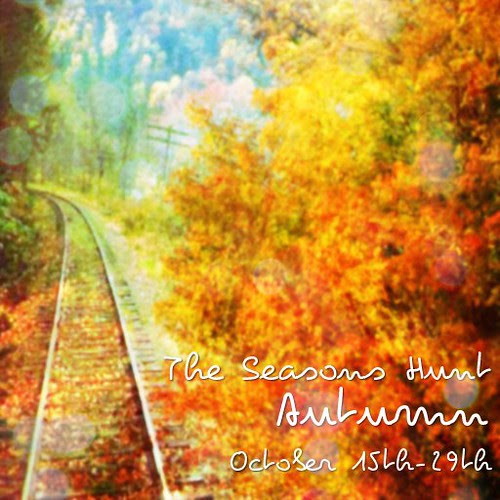 And I can't tell you how sad I was to hear that this autumn's Seasons Hunt will apparently be the last one. I love them so much. What can I say? Would it make a difference if we all begged nicely? *sigh*

This view! I really like the view from this side. From the front, these slacks look a little plain. Tweedy and nicely highwaisted, sure. But when I put them on, I was really digging on the little zipper in the back.

Thanks for my cutie patootie, Ms. Betty!

Messing about with shadows and depth of field for the first time. (Jumping up and down like a three-year-old) I wanted to photograph some landscape which makes for little bitty pictures, but if you click them you'll see the larger pics on Flickr.

I wore a dark undershirt under the sweater to help you see the detail of the crochet work. When I'm wearing several garments the same color I like to put in lots of texture. (The old art teacher used to say "unity in variety". The color has unity and the texture throws in some variety.) Today I'm letting the landscape have all the flashy color.

I really needed a walk in these trees.

There's nothing like those early fall days, with crisp cold morning air and sunshine at the same time!

I was jonesing for fall last night, and this morning at my house it was snowing a little. I should be careful what I wish for!

p.s. Yes I did modify my shape quite a lot to fit this outfit. the mesh skirt and boots were made for thinner legs though they leave some nice tush. And the sculpted shrug is made for someone with rather smaller chest than my usual. :) Mwah!
by Serene Fairey No comments:
Labels: booN, Curio, Deco, Diesel Works, Exile, Fashism, Gala Phoenix, Ivalde, Jane, LAP, Mon Tissu

It is difficult to know at first if she is just a beautiful queen, or the villainous evil witch. Until she shows her claws.

(I found these particular claws at the Halloween Bizarre on Twomoons Island. To die for. Literally.)

It's October and Halloween is swirling into our world. I just love the whole thing!!