He should have been afraid, but he was too busy checking my silhouette. I turned toward him and rattled my tentacles a bit. I could see the fear as soon as he saw them coiling and uncoiling. Perhaps he'd mistaken them for hair in the dark.

But he didn't run. That was odd.

So I put the human in his place. But he lay there and stared. He still didn't run.

I swear some humans don't have any sense of self-preservation at all.

(I was inspired by these GrollWerks cyber arms. They can be retextured lots of ways and they don't have to be shiny like I made them here. I preferred the matte black but it didn't really photograph well. The result was fab fun, especially since the gas mask made me sound like Lord Vader.

One more note; about the boots. Their shape is very creative but the boots are obviously made for people with very thin calves and large feet. (Think anorexic couture models.) When I put them on, the contrast between the tiny calves and muscular thighs was jarring, so I made a new, much thinner shape. I try to avoid doing this but I really do love boots.)

The My Stuff Bags Foundation provides dufflebags of toys, books, clothing, and toiletries to children who enter shelters or foster care with few (if any!) personal belongings of their own. Through June 5, the First Annual Kids Fair is raising funds for this lovely organization. You may read more about the My Stuff Bags foundation at their website.

Each of the participating designers has at least one vendor marked to donate either 100 percent or 50 percent of sales to the charity fund. I know that children are a mostly invisible minority in Second Life, but in Real Life they deserve our support. I have in mind a cousin who through no fault of her own, landed repeatedly in Child Protective Services, foster care, and on and on.

Two pairs of eyes really. I finally decided to try some loverly new eyes from Fashism, but the title is inspired by the necklace. The little painted portrait is beautiful but if you stare a while you realize that it is watching you. Her eyes blink. Spooky.

I wanted something suitably ornate so I put together several pieces from Pixel Dolls.

... and sacrificed the photo of the full length skirt and bustle. I love bustles but I am showing these GField shoes instead. Yummy. Why yes, I am a shoe whore. Thank you for noticing. I love you too. :D

Digging around my bloggitybloggage closet I ran across a neglected bag of things from the Albero Gacha Festival. (Yes, I should be more organized.) My favorite schtuffs were these sweets. The Ring Pop took me way back but I restrained myself from popping more and more coins in the vendor to get all the flavors. And who doesn't like fruity popsicles? You know you love them. All calories hand-removed by elves.

It isn't too late for you to go to the Gacha Festival for a bit of cheap fun. If any of you haven't tried one of these events before, these inexpensive little vending machines randomly choose an item for you. Almost all of these things are transferrable so you can give any duplicates to your friends, or maybe trade to get the items you want.

Each popsicle comes with a matching tattoo layer that colors your lips and tongue. *grins*

I love when an outfit can be feminine and comfy at the same time. ... These lovely Sea Hole jeans are decorated with painted purple flowers and some cute little denim ruffles.

I show the back side too cause I wanted you to notice the cute elbow patches on the jacket. They are an add-on layer from Alphavillain; the multipack includes several different suedes, leathers, plaids and tweeds you can layer over other jackets. Just love it over the Mon Tissu tweed.

Watching the stream below for breakfast. Why, what does this cute little faun eat for breakfast? The first furry critter that shows up for a drink of water. You shouldn't watch.

Sadly, doing these atmospheric lighting posts hides a lot of the beautiful detail so you can't completely see how gorgeous the hair and her cute faun-legs are. I try to take turns between posts in-world and posts in studio lighting. It's an uncomfortable compromise but I can't bring myself to give up on either type of photography. But if you click on the photos for details, you can still see the swirly tattooed skin, the soft folds of the sculpted scarf, and her scary beautiful eyes! Love love love.

Should I quote Shakespeare with the three witches? Or something from the Brothers Grimm? No, only one thing keeps popping into my head ...

I put a spell on you, And now you're mine
You can't stop the things I do, I ain't lyin'
It's been three hundred years, Right down to the day
Now the witch is back, And there's hell to pay

I put a spell on you
And now you're mine! 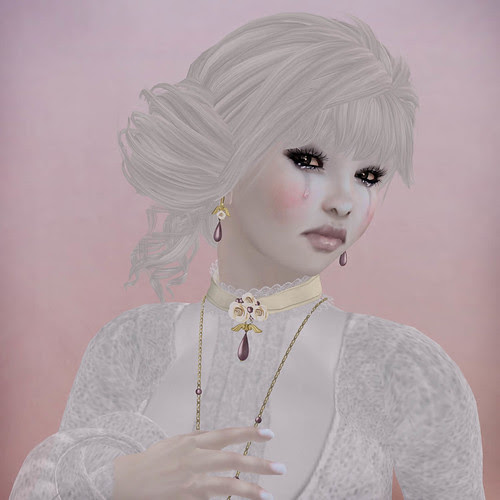 This lovely translucent skin from the Ugly Duck shop is an exclusive charity benefit item at the Culture Shock event. As I wear it here it looks fairly normal, but there is also an included "alien" textured skin and a scary looking set of eyes that I look forward to using for roleplay. The cream and roses complexion made me think of wearing Ms. Ennui's set of jewels. Using the texture change controls you can color the metals, pearls, flowers, ribbon, and even the lace. I love the flexibility.

I love the brocade and lace textures on the white. It is so hard to pull off white clothing! I had already purchased the blouse from Sur, and the wrap top and miniskirt are gifts from Ivey Deschanel.